So, have you hopped on the kale bandwagon yet? If not, I have another delicious kale recipe to tempt you with… and this one has the added appeal of CARBS! If adding a bunch of bread to your vegetables doesn’t make them more appealing to you, then I have to assume you are broken, and I feel very sorry for you. (Kidding! I mean, I guess you don’t HAVE to love bread… but you probably should, I think.) 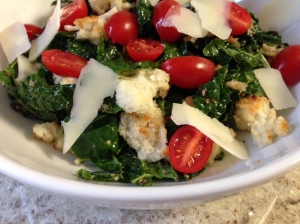 ANYWAYS. The first incarnation of this recipe occurred a few weeks back. I was making some delicious grilled artichoke subs for dinner (recipe forthcoming!), and I ended up pulling the insides of my baguettes out, to make room for more artichokes. I could not, in good conscience, throw out perfectly good bread, so I was going to freeze it to make breadcrumbs with at a later date… but then it occurred to me that I could toast it up, and use it to make a panzanella salad! As luck would have it, I had a fresh bunch of kale in the fridge (it’s a staple – I ALWAYS have kale in the fridge), so I decided to make a kale panzanella. After a bit of tweaking, I’m finally ready to share the recipe with you! 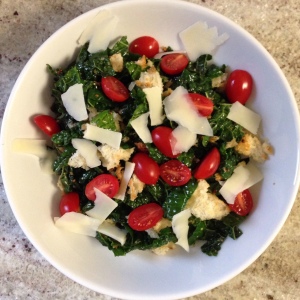 *I find that lactinato kale is the most palatable (texture-wise), especially if you’re trying it out for the first time. Lactinato kale (also called dinosaur or tuscan kale) has flat, broad, dark green leaves that are kind of pebbled in texture… most other varieties are lighter green, and curly around the edges. They all taste pretty much the same, in my opinion!

**You want to use a good, hearty bread for this salad; now is not the time for regular sliced bread. I prefer not to use the crispy crust of the bread (I would use a soft baguette, or a loaf of ciabatta or other good Italian bread), but you certainly can if you’d like to!

1.) Preheat your oven to 375°. Line a small baking sheet with foil, and spread your bread pieces out on it. Toss the bread with about a tablespoon of olive oil (I used my olive oil mister, and it worked nicely), and toast it in the oven until it’s golden brown and crispy, about 8-10 minutes. Allow the bread to cool slightly.

2.) While the bread toasts, prep your kale. Remove the leaves from the tough stems, and discard the stems. Stack all the kale leaves together, and use a sharp knife to cut the leaves cross-wise into 1/2″ strips. Wash and dry the kale as necessary (a salad spinner is optimal, here).

3.) Add the kale to a large bowl, and add one tablespoon of olive oil, the lemon juice, and a pinch of kosher salt. Use your hands to work the oil and lemon juice into the leaves, until they’re all thoroughly coated and beginning to soften, about a minute or two.

4.) For the vinaigrette, add one tablespoon each of olive oil, balsamic vinegar, whole grain mustard, and honey to a small bowl. Add a pinch each of kosher salt and black pepper, and whisk to combine. 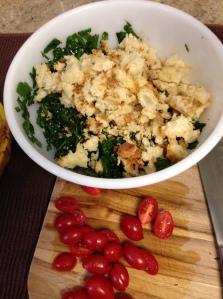 I have tried several different dressings with this particular salad, and this one was definitely the winner. It’s got a bit of sweetness, a little bite – and some texture from the whole grain mustard. I also really, really love the pairing of the hearty kale with the crispy bread… it just works! Of course, you could switch up the toppings of this salad however you like (olive, artichoke hearts, cucumber, bell peppers), but I love the sweet tomatoes and salty parmesan together. I promise this salad will make a kale lover out of the most ardent kale hater! 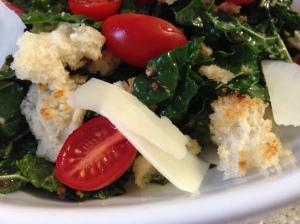 And then you get to feel smug and virtuous all day, because YOU ATE KALE,
Tina

you don't have to burn atlanta to make a statement... Cancel reply